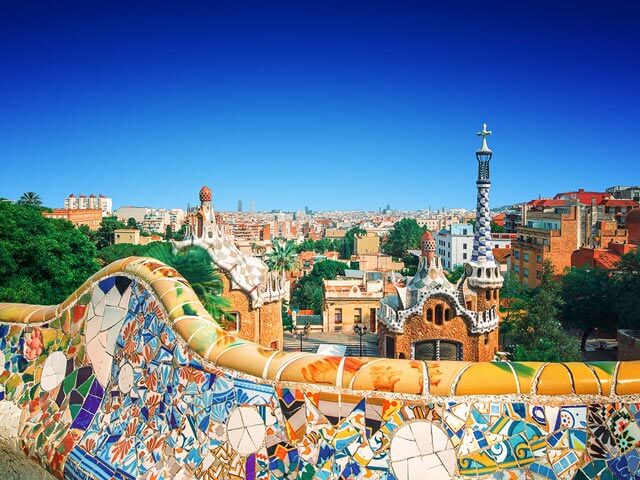 Flight and hotel in Barcelona

Barcelona is the cosmopolitan capital of Catalonia, Spain’s most north-easterly region. It has always been outward-looking and refined in its culture and this is evident in the city’s intellectual life and love for the arts. Elegant architecture soars above the streets while museums house extensive collections of works by artists inspired by the city. The cuisine ranges from hearty traditional fare to exquisite contemporary delicacies, while at night the sounds of flamenco and lively wine bars fill the air. Catalans love to celebrate well into the night so you’ll always find a party. Check out our holiday packages and holiday deals to Barcelona to join in.

Things to know before visiting Barcelona

Barcelona is one hour ahead of the UK. Spain is a member of the European Union and the currency is the euro. If you’re planning on travelling via a flight from London to Barcelona or a flight from Manchester to Barcelona, then you will probably fly into Barcelona International Airport, Girona Airport or Reus Airport. Barcelona International Airport is the closest, about eight miles south-west of the city centre and a 20-minute taxi ride. Alternatively, the RENFE train and Aerobus express bus services both take about 25 minutes. Girona and Reus airports are both about 65 miles away (Girona to the northeast and Reus to the south) and it takes just over an hour to get from either into Barcelona by taxi. Take a look at our holiday packages and book a flight to Barcelona today.

What is the weather in Barcelona?

Barcelona has a Mediterranean climate, with hot and sunny summers and winters that are mild. Summer, from June to August, is very pleasant with highs around 30 degrees Celsius – the coastal location and sea breezes tend to buffer the city from the extremely hot weather but it can reach mid-thirties at times. Spring and autumn are mild and often sunny, sometimes rainy. Winter, from December to February, is typically mild, sunny and rarely cold, though some cloudy or windy days can occur. Average high daytime temperatures in winter tend to be about 15 degrees Celsius. Check out our flight and hotel deals and book a holiday to Barcelona with us for a little bit of Mediterranean sun.

What to see in Barcelona?

A holiday to Barcelona can take in art, architecture and culture as well as time for relaxing by the beach or pool. Between the sunbathing and swimming here are some sights not to miss:

Look at our discount holidays to see all these attractions and more.

What to eat in Barcelona?

Spain is a great destination for foodies and Barcelona has its own unique Catalonian cuisine. Here are some foods you shouldn’t miss on a holiday to Barcelona:

Many dishes and delicacies are seasonal, such as calcots which appear between December and April. Pastries are highly seasonal, for example round marzipan cakes known as King's Cake (January), Lent fritters, chocolate Easter treats, candied fruit pastries for St Joan’s Day (June) and turron (nougat) at Christmas. So whatever time of year you travel you can be sure of a sweet welcome - our holiday packages should whet your appetite.

What to bring from Barcelona?

There are many unusual, delicious or beautiful souvenirs you could bring back from a holiday to Barcelona. Many of these are food or drink based because of course Catalans love to eat and drink. But whether it’s for yourself, family or friends, here are some ideas for gifts:

Look at our amazing holiday packages today for a chance to bring these mementos home with you.