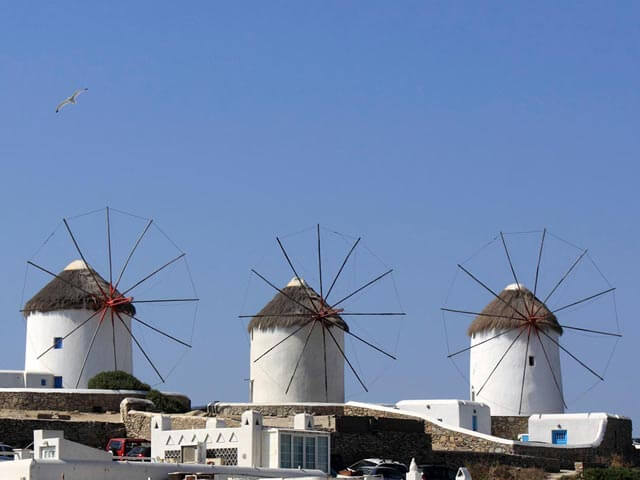 Flight and hotel in Mykonos

Mykonos, the largest town on the Greek island of the same name, overlooks the turquoise waters of the Aegean Sea. This is a beautiful place that welcomes visitors with whitewashed houses, bright doors and balconies framed with pink bougainvillaea, with winding labyrinthine streets, boutiques and cafes. The history of the town dates back centuries and it is known for the church complex of Panagia Paraportiani and many other cultural monuments. In more recent times Mykonos has also become known for holiday packages that celebrate its dynamic nightlife, and while an evening might begin in one of the laid-back bars sipping a sunset cocktail there are also several amazing clubs in which to dance the night away. Book a flight and hotel to Mykonos with us to experience the different sides of this wonderful island.

Things to know before visiting Mykonos

Greece is part of the European Union and the currency is the euro. Mykonos is two hours ahead of Greenwich Mean Time (GMT). If you're catching a flight from London to Mykonos or a flight from Manchester to Mykonos, you'll fly into Mykonos Airport. This is located just two miles southeast of Mykonos town, making it very convenient for transfers which take about 10 minutes by shuttle. There are also regular public bus services, taxis and car hire branches, while some hotels also offer private transfers. During the summer season, several international airlines have a direct flight to Mykonos and there are some great holiday deals. Compare holidays and plan your trip today.

What is the weather in Mykonos?

A holiday to Mykonos may be blessed with balmy Mediterranean weather, azure blue skies, sunshine and warm temperatures for much of the year. Summer daytime temperatures are around 25 degrees Celsius, while spring daytime temperatures are around 15 to 20 degrees and autumn around 13 to 18 degrees. It can be quite breezy during winter and this is reflected in the windmills that can be found throughout the island. Rainfall is infrequent and not abundant, generally falling between October and March before giving way to gloriously dry summers. Take a look at our great low-cost holidays to escape to the sun.

Things to do in Mykonos

If you like to relax by a palm-fringed pool and sip cocktails as the sun goes down then a holiday to Mykonos is ideal. Little Venice is a great place to spend time wandering picturesque streets, browsing boutiques and people-watching from a seaside café. Stores sell local handicrafts and stylish clothing and jewellery, while at the local coffee shops and delis visitors can sample kopanisti, a creamy, spicy cheese, and kalathaki, a delicious almond cake.

There are several beaches within easy reach, from secluded Megali Ammos and the beautiful cove of Agios Stefanos to the more popular Korfos and Ornos, both which have great facilities for watersports such as windsurfing and water-skiing. But there is also another side, a fun-loving, vibrant side that makes visiting this city a pleasure for sun-seeking hedonists. Bars overlook the sea and because Mykonos is west-facing it is the perfect location for scenic sunsets, but the cafes and bars stay open all day for coffee and cocktails. Many have live DJ sets and live by the mantra that every day is a party. Holiday packages can be tailored so you can do as much or as little as you please.

What places to visit in Mykonos?

Mykonos has several museums telling the story of the island. The Aegean Maritime Museum is devoted to Greek maritime history, with wonderfully restored historical exhibits and tales of merchant ships, shipwrecks and sailors lost at sea. The Agricultural Museum and Boni Windmill is an open-air museum that is part whitewashed windmill, which still grinds flour, and part museum with historic agricultural exhibits including a threshing machine and grape presser. The Folklore Museum is close to Panagia Paraportiani and houses vintage furniture, paintings, ceramics, photographs, textiles, musical instruments and agricultural and maritime tools. Highlights include canons dating from the 1821 War for Independence, 19th-century-styled rooms and exquisitely embroideries. Then there are the art galleries with classical and contemporary exhibits such as the Rarity Gallery.

The church complex of Panagia Paraportiani is a beautiful structure that actually contains five separate churches. The oldest dates from the 14th century and was then added to gradually in the 16th and 17th centuries. Today the complex is one of the most photographed in the country and beyond and it is easy to see why, with its gloriously whitewashed walls rising up into blue skies. You could be visiting any of these places with all-inclusive holiday packages or a flight and hotel to Mykonos.

What to visit around Mykonos?

Day trips run from Mykonos to Delos islet, an archaeological site with colourful floor mosaics, decorative pillars, statues and small temples. Delos is known in Greek mythology as the birthplace of the gods Apollo and Artemis and was a sacred sanctuary for centuries.

Some of the island’s loveliest beaches lie outside Mykonos town, such as Ornos and Psarou, both of which are suitable for families and those wanting to escape busier resorts. Agios Ioannis is a stylish enclave made famous by Shirley Valentine. But for those seeking some of the action, Paradise Beach on the southern coast is the only way to go – the parties start in the afternoon and don’t settle down until morning. What are you waiting for? Discover paradise with our flight and hotel deals and book a holiday to Mykonos today.