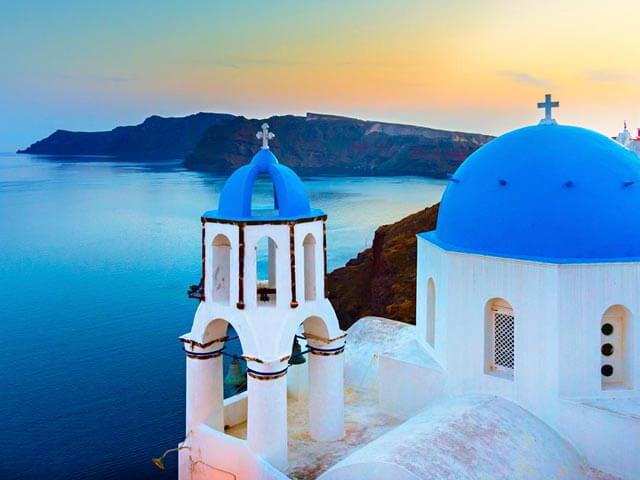 Flight and hotel in Santorini

Santorini is a stunningly beautiful island. Floating in the Aegean Sea, over a hundred miles from the Greek mainland, Santorini’s gleaming white, blue domed houses rise from the rocky cliff face like a benediction. Dazzling in the sunlight this is just the first indication that Santorini is a very special place. Here you will find spectacular sunsets and gorgeous hilltop villages, mythological sites and volcanic sand beaches. If its culture you’re after, Santorini will not disappoint – it is home to artists, writers, fine restaurants, vineyards and even craft brewers. On a holiday to Santorini you can experience all this for yourself, so take a look at our great holiday deals.

Things to know before visiting Santorini

Santorini is part of Greece and therefore also the European Union, with the euro as its currency. It is two hours ahead of the UK. If you’re going on holiday to Santorini on a flight from London to Santorini or a flight from Manchester to Santorini then you’ll fly into Santorini (Thira) International Airport. This is located about four miles southeast of the town Thira. Most hotels booking package holidays will run a complimentary shuttle bus to pick up and return guests to and from the airport. You can also catch a taxi or a bus or rent a car from car hire companies located in the terminal. Book a flight to Santorini with us today.

What is the weather in Santorini?

Santorini has a typical Mediterranean climate. The summers are warm and sunny, with beautiful blue skies and hardly no rain at all. Average daytime temperatures in summer are around 27 to 29 degrees Celsius - the sea breezes keep the island from experiencing very high temperatures so it is very pleasant. In autumn the temperature drops a little, though September is still around 26 degrees and even November around 20 degrees. Winter brings daytime temperatures of around 14 to 16 degrees and most of the rainfall is from October to March, though there are still many sunny days during this period. In spring the temperature starts to rise again, reaching about 22 degrees by May. A holiday to Santorini can be lovely whatever the time of year, so whether you want to browse off-peak discount holidays or summer breaks you’ll find them with us.

What to do in Santorini?

Here are some top experiences to try in Santorini:

Browse our range of holiday packages and holiday deals to Santorini which offer the above tours and many more.

What to see in Santorini?

Santorini has museums, galleries and historic sites alongside great beaches and fun resorts. Check out our list below for inspiration on your holiday to Santorini:

Compare holidays with us today for your pick of Santorini’s attractions.

What to eat in Santorini?

Santorini has some great classic tavernas serving traditional Greek food as well as relaxed resort cafes and beach bars. Authentic Santorini dishes to try include fava, a yellow split pea puree, and tomato fritters. Apochti is pork loin that has been salted, marinated in vinegar and dried before being rubbed with pepper and cinnamon. Sweets include kopania, a confection made with barley rusks, raisins and sesame seeds, and melitinia, a sweet cheese pie. The island is also well known for its white aubergines, capers and the creamy goat’s milk cheese known as chlorotyri. Browse our range of holiday packages and holiday deals to Santorini to plan your trip.