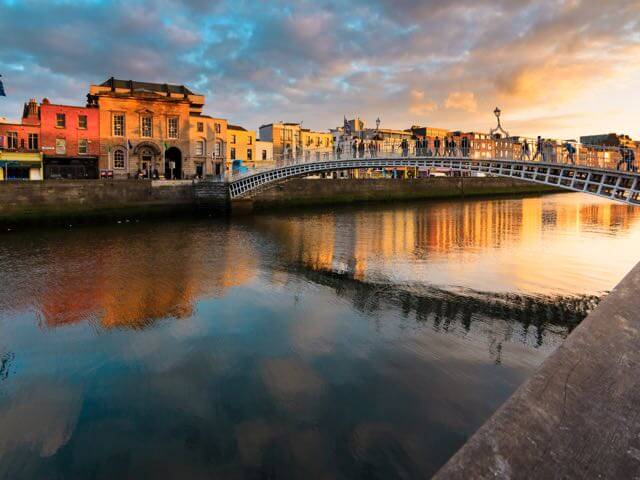 The capital of the Republic of Ireland, flights to Dublin are short from the UK making it a popular destination for weekend getaways as well as longer breaks. Anyone seeking a flight and hotel to Dublin will find there is plenty of choice, no matter when their preferred dates of travel happen to be. The city has a population that exceeds one million people with nearly two million inhabitants making up the wider Dublin area. The name of the city derives from old Irish and translates best into English as black pool.

Facing the Irish Sea via Dublin Bay, the city has been populated since prehistoric times and was a centre of Viking activity from the 10th century. During the late 1990s, the economy of the city really took off with many major corporations basing their headquarters in the Irish capital at that time. Although much of the architecture of Dublin dates back to the nineteenth century, a great deal of urban regeneration has taken place over the course of the last few decades. A vibrant city that is a cultural hub of Europe, there are plenty of cheap holiday deals to Dublin to select from, so book yours today.

What is the weather in Dublin?

Package holidays in Dublin mean experiencing weather that is typical for north-west Europe. In other words, there are few extremes with relatively cool summer periods and mild winters. Although the country as a whole has a reputation for plenty of rain, a holiday in Dublin shouldn't see too much precipitation on the whole. This is because, on average, the city is the driest place in Ireland, a fact that can be attributed to its somewhat sheltered location. June, July and August are the three warmest months to visit with the highest daily averages. When easterly winds are prevalent, the city can face flurries of snow. However, these are rarely deep freezes and seldom much more than a passing shower. With plenty of parks to enjoy the Dublin weather and many places to take respite from it, Dublin is a great place to head at any time. Why not book your trip right now?

Things to do in Dublin

Like many European capitals, hop-on and hop-off bus tours are a good way of getting to know Dublin. Anyone on a short flight from Manchester to Dublin with limited time ought to buy a ticket which often allows for unlimited trips within a 72-hour period. A tour of the famous Guinness storehouse in the heart of the city is also a good idea. This delightful beverage is a part of the culture of many Dubliners and the tour itself includes a free pint to try out. For the energetic person on holiday in Dublin, kayak hire is another great activity to try out. The Liffey flows through the city and offers great views of many of the landmarks. As such, hiring a kayak to navigate your own way among them by river is the perfect way of getting around under your own steam. Two-hour hire packages are available from a couple of river-based operators. Explore the city your way once you have found your perfect flight and hotel deal to Dublin!

What to see in Dublin

Tourists booking low cost holidays to Dublin often miss out on the city's zoo unless they have children. However, Dublin Zoo is an excellent place to visit even if you don't have kids to entertain. There are plenty of daily talks and experiences to get involved with. A visit to Croke Park is another must-do activity for anyone considering holiday packages to Dublin. This huge sports stadium is a temple to Gaelic football, although it is used to host other big sporting occasions from time to time. If it is not a match day, then enquire about the possibility of a stadium tour. Another essential thing for any itinerary in the city is a visit to the country's National Gallery. Dublin is home to the Irish national art collection which includes many rarities and historic images from over the centuries. Plan your time in Dublin by booking your holiday without delay.

Places to visit near Dublin

Last minute holiday deals to Dublin should not mean that you stick to the city only. As a flight from London to Dublin is relatively short, you can explore some of the Irish countryside, as well as its capital, without feeling you are spending too much time travelling. For example, the Wicklow Mountains National Park is only a 30-minute trip from the city. It is an area of parkland that takes up 50,000 acres, offering views of mountains, lakes, forested areas and well-maintained hiking trails. To the west, Kildare is only an hour away by car from the centre of Dublin. This is a typical Irish town other than the fact that it is home to the Irish National Stud, where thoroughbred racehorses are bred. The centre is open to the public to tour around and it has some charming gardens to explore. The famous Curragh racecourse is only a couple of miles outside of the town and it gets very popular here if a race meeting is being held. Book your flight and hotel to Dublin and find out what the rest of Ireland has to offer.

What to eat in Dublin?

Discount holidays to Dublin will often come with a breakfast served at your hotel. A 'full Irish' is a cooked breakfast with sausages, bacon, eggs and toast. If you are looking for some culinary excellence in the city, then you are likely to need to head to one of Dublin's French restaurants since haute cuisine tends to revolve around continental food. The city enjoys a number of Michelin starred eateries to enjoy a fine dining experience. In addition, Dublin boasts plenty of mid-range cafés which have become fashionable in recent years. These frequently serve very good meals at reasonable prices, often attracting students and young professional people. Don't put off booking a holiday in Dublin and discovering its culinary traditions.